On Monday I had to visit SARS to submit an IRP6.  I'm what's called a "provisional taxpayer", which means I get to deal with the taxman about twice as often as people who aren't.
Previously their queueing system was just a long line of people waiting their turn.  Then, some years ago they started offering chairs - a little more comfortable, but the queueing system was basically the same: one's seat determined one's position in the queue, so it was like a big game of Musical Chairs.  And finally, about a year ago, SARS started issuing numbers at the reception desk: one could now sit anywhere and simply wait right there until one's number came up.  The numbers appear on a screen, but also, a Stephanie Hawking type computer voice reads the numbers aloud.
I had been trying to read a few pages of The Great Disruption, but Stephanie's staccato voice proved too distracting - like a numbers station's siren call.  So I decided to make lemonade.  For a bit more than an hour I jotted down the time and the new number - with the aim to write exactly this post. 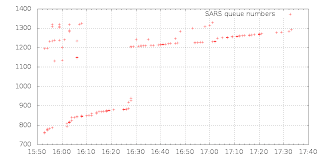 Now that I see the graph, it's a bit disappointing.  I was hoping to see points along more lines of different slopes and intercepts than the two segments visible here - which I know both to be from the "INCOME TAX RETURNS" stream.  (By the way, why are these things always in all-caps?)  There seemed to be multiple virtual queues running simultaneously, each allocating numbers from distinct ranges.  Perhaps I just didn't collect enough data - perhaps somebody needs to spend a whole day there.  Maybe next time.
Posted by Bernd Jendrissek at 05:00 No comments:

Using external tools to sort stills, and stdin as "listfile":

I need this to check if the dog lies on the couch while I'm out shopping!
Posted by Bernd Jendrissek at 21:19 No comments:

How many people get hit by celebratory gunshots into the air?


Wonder how many people have been hit by "celebratory" rounds fired into the air falling back to earth? #Libya

I've often wondered the same.  I think the number must be quite low.  Factors to consider:


Then, of every km² of land area, humans in Tripoli occupy at most about 2000m².  That is, 0.2%.  My guesstimate of an answer then to Nissemus' question would be that you might see one falling-bullet injury (not all of which would result in death) for every 500 rounds fired.
Posted by Bernd Jendrissek at 03:22 No comments: