I've added the capability to back-annotate pin swaps to gschem, to my fork of the gEDA project. Notice the commit "Add scheme function to swap pins."

To implement this, I took heed of David Wheeler's advice: "All problems in computer science can be solved by another level of indirection ..." (I stopped reading right there). Applying this to the gEDA data structures, I've added some magic behaviours to some attributes:
That should give you an idea of how I implemented pin swapping. There's more though, and it relates to a slotting mechanism I've built earlier and that doesn't fail the "mental model = program model" test. In fact the pin swapping works only in the context of this alternate slotting mechanism.
(Some of the map-like attributes are inferred to be identity maps if they are missing, or are missing specific entries.)
Time for some screenshots. I'll do only one pin swap to illustrate what PCB might one day do as part of a sequence of swaps that, together, effect a gate swap. Let's supppose I have two opamps, and the PCB tracks want to route crazy, unless I can swap them. Before I touch anything, I have opamp1's pins as 1, 2 and 3, and opamp2's as 5, 6 and 7. 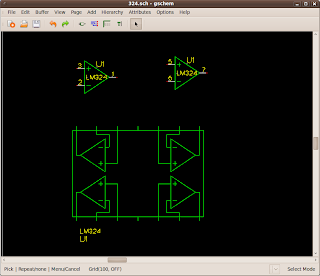 But I don't like that. I want them exactly the other way round. I'll start with the output pin:

(Notice the use of uuid - which PCB can certainly know via its own attributes.) Oh, did you see the pimped-up REPL I added?
Hey presto! opamp1's output pin is now 7, and opamp2's is 1! 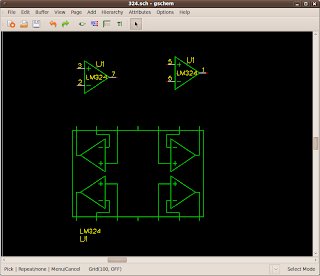